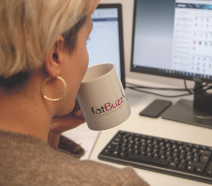 Over all of those 3658 days, we’re sure we have been asked one question more than any – “Where did the name fatBuzz come from?” Funnily enough, we weren’t named after our office dog, Buzz – it’s actually the other way around.

Our MD Gordon could probably rhyme off this story in his sleep, and it’s been told so many times that nowadays the fatBuzz team know when it’s time to ‘switch off’ (or mute the volume). However, for those of you who are still puzzled, here’s the story:

Back in 1986, Gordon started Design Matters, primarily offering graphic design for print and some marketing services. Years later, in 2005, along came Podcast Matters, which as you would guess, provided podcast production, editing and distribution services. Both these businesses grew in tandem and naturally started to offer more digital marketing services as demand increased. Soon, Design Matters and Podcast Matters we’re offering a comprehensive range of marketing and web design services and both had out-grown their founding names.

At this point, it made sense for these two businesses to come together as one. So, Podcast Matters ‘swiped right’ for Design Matters, and they became the perfect match. This business eventually grew over the years into who we are today. However, finding a name for the new hybrid wasn’t so easy. It was deliberated over for quite some time, and the team couldn’t agree on a name to reflect everything the new brand stood for.

It was Gordon, recalling a project in New York, who had the lightbulb moment. A colleague in NYC used to call him mid-afternoon with a funny way of saying “Let’s hit the town tonight”, saying instead: “Are we strapping-on a fat buzz tonight?”

We won’t share the details of their big nights out, but the phrase stuck and we’ve gone by that name ever since – after all, marketing is all about creating a “buzz”. Then, along came our favourite four-pawed colleague a few years later and Buzz seemed like a fitting name!

It goes to show that inspiration often comes when you’re least expecting it. Maybe we should arrange some more team ‘creative’ time in New York…