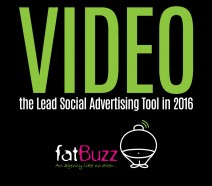 In our January blog on Marketing Trends to Consider in 2016, we predicted that video advertising was going to be big. When you consider that video ad spending grew 56% to $292million in 2015, it’s easy to see why this would be a trend to back.

However, video and the way we consume it is changing, so in order to make the most of what this medium can offer, brands need to consider how to use this tool to their advantage. In general, consumers are pretty quick to differentiate between advert and content and so in order to promote your brand effectively, you will need to be on the right side of creating video which doesn’t look like an advert.

One path which has grown and made it far easier for brands to promote their product through video is by making use of native video advertising. Social media platforms like Facebook and Twitter have already opened up native video ads, which means you no longer need to link to video from another source, and can instead directly upload to your desired social channel. By offering native video which starts to automatically play on your timeline, your video seems more appealing to users. 82% of Twitter users watch video on the social media platform, with over 90% of those viewers watching on mobile. Capitalise on the Twitter audience available at your fingertips with native video.

As competition in the social media heats up, social networks are fighting to keep users on their platform for as long as possible. In addition to keeping them there, networks also want them to engage with what they are seeing and doing. By allowing native video, users will remain on the platform whilst streaming the video directly from their timeline or newsfeed. It also offers the immediate opportunity to react, which streamlines the video journey on your social media.

For a brand or business, this can prove very effective. It means that users are staying within your social profile for longer, and again have a better, more efficient scope for responding. On top of this, you can easily track how each video is doing across each social platform. Take control of your video output and measure exactly how well your video campaigns are doing on social, and where you could do better.

Twitter recently opened up the possibility of delivering video via direct message on the platform. This means that it is now possible to send videos and GIFs in addition to photos and text in a direct message. With the already increased character limit available in the messaging function on Twitter, we could see a new style of automated messages sent out to new followers, providing even more new ways to capture the attention of possible new leads or users.

In order to make a success of video as a social advertising tool, brands need to be clear and effective in their message. There is no point in broadcasting a quick iPhone video for the sake of it, as you could appear spammy and instead switch off social followers rather than attract them. As with all other forms of content marketing, make sure your video has a point, is informative and/or entertaining and serves to further your brand values and image.

For more information on how fatBuzz can help you with social advertising and community building, please get in touch with Kyle on 0141 427 0727 or email kyle@fatbuzz.com