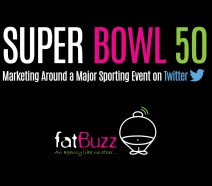 Last year the Super Bowl broke social media records with a phenomenal 28.4 million tweets about the event, up from 24.9 million the previous year. Whilst not the most tweeted about sporting event ever, this annual American Football event proved to be the most tweeted moment in 2015.

With its 50th anniversary coming up, it’s set to be a popular social trend again this year. And as ad prices start from a whopping $5 million, the best value marketing tool around this event is definitely social media.

When you consider the huge reach at steak, it makes sense that brands would want to get involved in this. There are good and bad ways to do this, but the worst thing to do would be to completely ignore the scale of the event and try to push your own social agenda against the tide.

Make use of the official Hashtags

With almost 400,000 people talking about an intercepted pass, and over a quarter of a million people discussing Katy Perry’s halftime show in 2015, it’s vital that your team is on the event live in the moment. Whilst it’s possible to do some planning in advance, there’s a lot to be said for live tweeting due to the unpredictable nature of any sporting event.

The biggest successful example of this is undoubtedly Oreo’s tweet from the 2014 Super Bowl. By live tweeting and having a team (or at least team member) ready to react, they came up with this spectacular tweet in response to the 30-minute blackout at the event. You don’t have to be as big a brand as Oreo to simply react and take advantage of a spur of the moment opportunity. Be aware of any Coldplay calamities or football faux pas which could indirectly relate to your brand.

Whilst using the hashtag #Superbowl50 or #SB50 might grab attention and get more reach during the Super Bowl, users won’t appreciate it if the content of your tweet isn’t relevant. For instance, ’50 Great Kitchen Cleaning Products #SB50’ with a blog link may get thousands of impressions, but you’ll be lucky if anyone actually clicks through to the content as it’s not immediately relevant to the event itself.

Instead, find ways to make your information relevant to the event. For example, you can play on the fact that many people host Super Bowl parties, and will therefore probably spend a lot of time in the kitchen beforehand making snacks and drinks. This is then the perfect opportunity to introduce your 50 great cleaning products.

Live tweeting and being immediately reactionary on the night will work wonders, but it’s also advisable to plan some content around the event. Whilst you wouldn’t want to tweet about ’50 Great Kitchen Cleaning Products’ in the middle of the event when nobody is remotely interested in cleaning, tweeting the morning after, when there’s plenty of mess around would be much more appreciated. Similarly, a food magazine or website may do better to tweet superbowl-themed snacks a few days to a week in advance of the big game, rather than 5 minutes before kick-off.

If you would like more information on how to market your brand on social media around major sporting or cultural events, get in touch with Kyle Murdoch or Gordon White today by emailing hello@fatbuzz.com or calling 0141 427 0727.