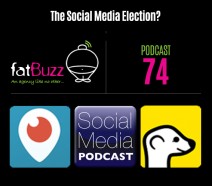 It’s all about the election in Social Media Podcast 74 as fatBuzz account managers Liam Cutkelvin, Zara Cameron and Cameron Wilson delve into role social media played in the recent general election, was it the defining moment many had expected or a damp squib?

As always we share and discuss the latest news and stories from the world of social media, including Facebook testing it’s own search engine; the latest developments from Meerkat and Periscope; the latest new Instagrammable experience known as foodography; how Dominos plan to take your orders via Twitter and much more

The full podcast notes can be found below, including links to all the relevant articles:

38:07 – Main Discussion – The Social Media Election?  Some highlights from the election on social media   Figures and insight More stats   A sign of things to come?  Figures from the Guardian

“The Social Media Election that never was”

If you would like to share your thoughts on any of the topics, suggest a topic, or be featured on an upcoming podcast, please get in touch at hello@fatbuzz.com with the topic “Social media podcast”. For more updates follow us on Twitter @fatbuzz

You can also reach those on the podcast from the fatBuzz team at: