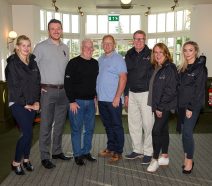 fatBuzz are proud to have been headline sponsors at this year’s Spina Bifida Hydrocephalus (SBH) Scotland charity golf day at Gleneagles. We are delighted to share that the event, which was held on Tuesday 2nd October, raised over £15,000 for the charity.

The SBH Scotland Golf Day 2018 saw 21 teams of keen golfers take to the Queen’s Course for a day of fundraising, with a little healthy competition thrown in for good measure. The day started with a breakfast meet, and a shotgun start at 11am. The weather definitely worked in our favour, which helped the atmosphere of the day, if not the golf skills of the fatBuzz team.

Representing the fatBuzz office on the green (and in the bunkers!) were Gordon White, Kenny MacMillan, John McLellan and guest Brian Maule. Unfortunately, they didn’t manage to win any of the prizes on offer, despite Marion White, MJ McNally and Kimberley Manderson being in charge of the prizegiving!

The whole day was fantastic fun, with Des McKeown compering, a Q&A from NorDan sponsored Commonwealth para-athlete Meggan Dawson-Farrell, and a raffle and auction with some envious prizes and lots on offer. Between the raffle, auction, hole sponsors and team entries, SBH Scotland managed to raise a total of £15,000 for their cause, which was £3,000 over the £12k target set.

“It was a pleasure to be the headline sponsor for the SBH Charity Golf Day at Gleneagles and we were delighted that some many of our clients supported us on the day.  It is a very worthy cause and we enjoyed working with Richard and his team, they made it easy for us to be sponsors.  My only reservation when Richard first approached us to sponsor a golf day in October was the weather, however we were blessed with glorious sunshine which only added to the day.  We are delighted to also announce that we have already agreed to sponsor the event again next year.”

We would like to thank everyone involved in making the day such a great success, including our clients NorDan who sponsored a hole, sponsored prizes and entered two teams, Glasgow Memory Clinic, who entered and went home with two auction prizes, Walker Laird and FA Munro for participation, hole sponsorship and prize sponsorship, and hole sponsors NVT, who’s team managed to come in second place (we demand a recount!).

“Many thanks to all the team at fatBuzz, an absolute pleasure to work with you all. I’d like to pass on my gratitude for the amount of work that your team put in during planning, and we will very much look forward to working with you again at Gleneagles 2019.”

Please get in touch if you would like to take part in the SBH Scotland Charity Golf Day 2019.