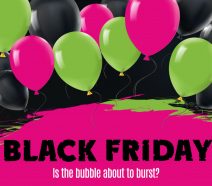 Black Friday isn’t even here yet and already it feels like we have been celebrating it for about a month. This tradition, which originated in the USA, has blown up in the UK over the last five years – but is it about to burst?

There’s no denying that Black Friday is a valuable marketing tool and big sales day for many instore and online retailers – despite the tradition that Cyber Monday (the following Monday) was dedicated to online deals. However, it feels like we have come to a point where retailers and their marketing departments have absolutely milked the life out of the event, with an information overload. Are we now reaching a point where consumers are turning off to the whole idea of Black Friday?

Christmas gets earlier every year

A saying that my mother is fond of, but it’s also true. Many Christmas light switch-ons in towns and cities take place in early November, when the bonfires have just about died out. It seems like the same goes for Black Friday, with many stores advertising offers and “Black Friday” discounts well before the date. In particular, there have been a few high street fashion retailers who have been advertising their Black Friday deals since last Friday (16th November) which just leads to confusion for everyone.

Customers are left in a period of uncertainty, whereby they don’t know whether to purchase the so-called early Black Friday deals, or wait till the actual date of the event for a bigger discount. Essentially, some brands could just be shooting themselves in the foot by pushing early offers, trying to beat the crowd.

Discounts galore – or are they?

One of the biggest claims against Black Friday deals is that the discounts aren’t actually all that great. In the UK, there’s a 28 day pricing rule which means that products must be sold at a price for that time before being discounted, within a six month period. Some brands have taken advantage of that and have inflated prices around September and October, to allow them to discount on Black Friday. By doing this, the discount can also seem much greater, tempting more people into buying. In reality, the item may have been sold at a similar price (or, as some news reports are suggesting, even cheaper!) in the spring time, as March and April would fall out of that six month period.

Consumers are always looking to get the best bang for their buck, no more so than at Christmas time, so many shoppers have become much more conscious of the deal-baiting. This means many customers are doing much more research this year before making purchases on Black Friday or during the Black Friday sale period. However there’s no doubt that some customers will be put off by having to put so much effort into shopping that they just don’t bother with the deal at all.

As a marketer, a well-executed email really gets me going. Whether it’s a personalised offer, interesting design or catchy subject line,

However, this year it seems like many reatailers have gone overboard with their Black Friday email strategy. Some brands have been sending emails about Black Friday since the beginning of November – some even sooner. In the past five days I’ve received at least 10 emails from a popular high street health and beauty store, which is about nine too many for me to keep up with!

There’s no doubt this will play havoc with the stats – open rates and subscriber numbers – but it will also turn a lot of consumers off. Even if a typical consumer only subscribes to one fashion retailer, one beauty retailer, one supermarket and one online-only outlet, you’re talking over 50 emails a week in November to tempt you with Black Friday deals – who has time for that??

The idea is to capitalise on the sales potential of Black Friday by offering the customer an incentive to shop with you. However, the customer may never receive your incentive if they don’t open the email. We need to be more conscious of consumer time, the way consumers shop and the way they want to be marketed to, otherwise we risk losing those all-important subscribers – which are already more precious since GDPR came into force!

There’s also a case that heavy discounting on Black Friday, just because everyone else is doing it, actually devalues your product. People may hold off purchasing your products or services in November, knowing that you will run a Black Friday discount at the end of the month. Why pay full price if there could be a discount for your patience? November has traditionally been a key month for Christmas sales in stores, but before the Black Friday madness struck, retailers were able to capitalise on full price sales during this month. Many agree that participating in Black Friday can not only devalue your product, it can mean shooting yourself in the foot as there’s a guaranteed market of people actively wanting to buy in November.

With debatable discounts, email overload and a plethora of deals appearing earlier in November, it looks like Black Friday is at its peak of marketing. If not now, it seems as though the Black Friday bubble may be about to burst in the next couple of years, leaving a debris of unopened emails, unused discounts and over-ordered stock.